This post documents a trail I followed with my cousin Iliana who visited me from Greece for the first time a week ago. She had 4 nights and 5 days. I hadn’t spent considerable time with her prior to her visit to know exactly what she’s like but I soon figured that she wasn’t too bothered visiting tourist sites and museums and was wide open to everything.

She came on a Thursday morning and left Monday evening. This is by far one of the best slots to be in London especially if you want to experience some of the many and colourful London markets. I live in London Bridge so a number of cool things were on my doorstep.

Locations and activities split by day:

Monmouth Coffeeshop at London Bridge, Borough Market (specific appeal to my cousin had the spice shop ‘Spice Mountain’ & the gluten-free cakes from ‘Free from Bakehouse’), Tate Modern. Walk along the Thames towards Tower Bridge and Shad Thames. Up the Shard on the 32st floor and steps down to the floor below where the bar is situated with panoramic views across London (don’t forget to visit the toilets). Dinner at Wagamama on Clink street.

Usual Monmouth Coffee ritual followed by Borough Market. Introduced Iliana to my Green Detox Smoothie  which became a staple throughout her stay and a must-have tonic before heading out for the day. In addition to the standard ingredients each day I used 1tbs of Maca powder, an Inca Superfood good for energy, hormonal balance, sexual health and ideal for relieving stress (physical, emotional or environmental). Walk from London Bridge (Clink street) along the Thames path to the South Bank Center and across the Embankment footbridge to the Strand and Covent Garden. Browsed shops on Long Acre and Neal street, Neal’s Yard and the beautiful Neal’s Yard Remedies shop. Pointed the vegetarian/vegan ‘Wild Food Cafe’ above ‘Neal’s Yard Remedies’ which specialises in raw food. Had sushi at ‘Itsu’ on Neal Street. Walked through Soho. Visited beautiful ‘Liberty’s’ and had a terrible coffee at their cafe – the important lesson of recognising the rarity of places like Monmouth coffeeshop and why the queues are so long! The architecture of the place, the display of all its merchandising, the Christmas shop are an explosion to the senses especially for someone stepping out of Greece. Walk to Oxford Street and into ‘Selfridges’. Walking through the beauty and make-up department I couldn’t fail to notice how her face suddenly lit up and how she longed to live and work in London for a while. Tube back home and dinner at my kitchen: made a simple spelt pasta dish (spagetti works best) with raw baby spinach, Greek goat’s feta, avocado, pomegranate seeds, and cherry tomatoes. I drizzled toasted sesame oil and Greek olive oil, squeezed a lemon and added generous amounts of cracked black pepper. We also had a beautiful selection of marinated olives with coriander, lemon and garlic we had earlier purchased from ‘Borough Olives’.

Usual Monmouth Coffee followed by Borough Market. More cakes for later:) We loved the gluten-free cardamon, pistachio and rose water cake and the white chocolate brownie with rasberries from ‘Free from Bakehouse’. Green detox smoothie and train from London Bridge to Sloane Square to walk down the King’s Road. Another lunch at ‘Itsu’ (we happilly acknowledged how addicted we both were to sushi and green tea). Train from Sloane Square to High Street Kensighton and the must visit to ‘Wholefoods’. This was a key visit to buy certain ingredients as well as experience a shop of this magnitude. Train back home. Cake, pop-corn and chat in the kitchen and then off to Covent Garden to see the musical ‘Matilda’. Over the years I have seen a number of West End musicals: ‘Cats’, ‘Les Miserables’ (with my mum), Miss Saigon (won’t ever forget the embarassing moment of walking in half-way with my sister Nina as the helicopter was landing on stage), ‘Chicago’ (walked out half-way with my parents), ‘Phantom of the Opera’ (saw twice), ‘Billy Elliot’ (loved, also seen with my sister Nina this time right from the beginning which was sensible) and many others. ‘Matilda’ which was highly recommended by my dear (Melbourne-based) friends Peter, Maree and India a couple of years ago, was the most unbelievable of all. The acting was impeccable (perhaps the red logo of the Royal Shakespear Company appearing next to the musical’s title may have something to do with it), the simplicity of the scenes yet developed with such wonderful attention to detail, the talent and energy of the performers were truly outstanding. We joined the others and gave them a standing ovation. After the show we walked up to Garrett street for a ‘Snog’:) Love the taste and texture of this frozen yoghurt machine-based ice-cream. They use agave instead of sugar and offer a number of toppings. I had classic chocolate with fresh rasberries. My cousin had half chocolate and half caramel. Can’t remember what toppings. We could have walked home along the Thames but took the tube instead as it was getting late and we had already walked a fair distance during the day.

Monmouth coffeeshop is sadly shut on a Sunday. I always have my cup of black filter Monmouth Finca Catalina each morning so was not an issue. After our green detox smoothy we walked from London Bridge to Spitalfields Market. We were too early and everything was shut so we headed to Redchurch street in Shorditch and had coffee and breakfast at ‘All Press’ (by that time we were becoming experts at getting a table in heavily crowded places). I felt homesick sipping my soya cappuccino and having avocado on toast; ‘All Press’ is a NZ brand and curiously I’m not a NZlander but nevertheless, felt homesick. We wondered Bricklane’s flee markets and some of the vintage shops (many of which were underground). Central Line from Liverpool street to Bond Street. Walk to Park Lane and bus to Knidgebridge. For someone who has never been to London a quick visit to Harrods especially after Bricklane does give you the full picture. We only stayed 15 minutes. Quick walk through the Food Hall and a rapid browse on the first floor glancing at the price tags of some amazing clothes. Flying visit to Harvey Nichols to buy a perfume they stock that I like called ‘Lights’ by a brand called ‘Roads’. Bus from Sloane street to King’s road (we could have easily walked but were too lazy and there was a light London drizzle) where we had yet again sushi at ‘Itsu’! Another wonder down the road and train back home. We made a raw chocolate cake in my kitchen with ingredients bought from ‘Wholefoods’ (this is the recipe I was taught during my “Wild Food Cafe ‘Wellness Immersion’ training). Dinner at ‘Brindesa’ Tapas Bar in London Bridge. For dessert we had our very own raw chocolate cake while watching a very average film about online dating.

Usual Monmouth coffee where we had a sweet encounter with a little girl and her mum. She was very beautiful and chatty, drawing and writing her name on wooden spoons (she offered one to my cousin as a gift); it was one of a handful of occasions when I can sense and appreciate the wonders of motherhood. No green detox smoothy on Iliana’s last day so we headed straight to Bond street. Walk through the ever so elusive entry to St. Christopher’s Place to beautiful Marylebone High street. We were hoping to have breakfast at ‘La Fromagerie’ but was full so went to the ‘The Natural kitchen’ instead which was also lovely (my first freshly squeezed orange juice in ages which felt amazing). Bought a couple of books from ‘Daunts Books’ (‘Villa Triste’ by Nobel prize winner Patrick Modiano and ‘No picnic on Mount Kenya’ by Felice Benuzzi), browsed the beautiful ‘Conran Shop’ and a few others and then headed back towards the West End via South Molton street and New Bond Street all the way to Piccadilly Circus. For the grande finale we had high tea at the ‘Ham Yard Hotel’ before heading home to pack bags. 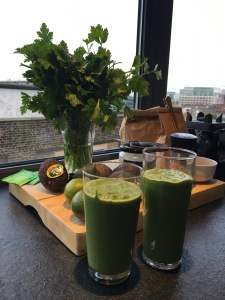 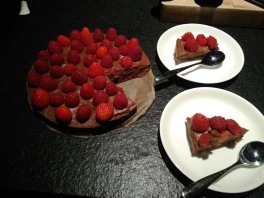 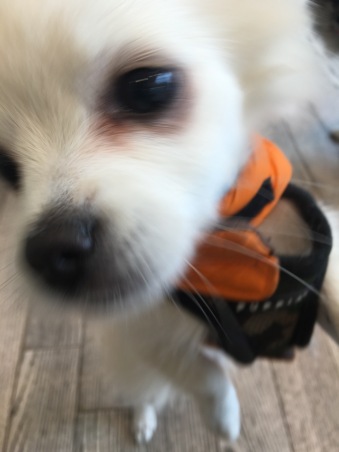 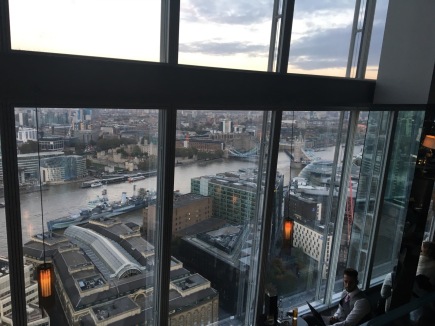 View from the bar, The Shard, London Bridge 31st floor 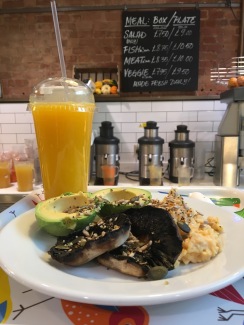 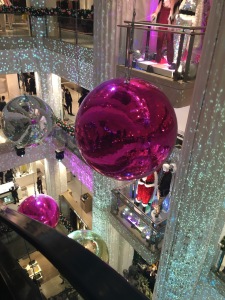 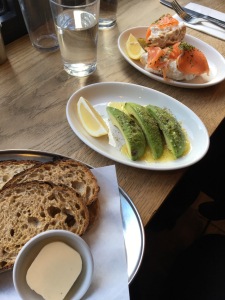 Breakfast at ‘All Press’ 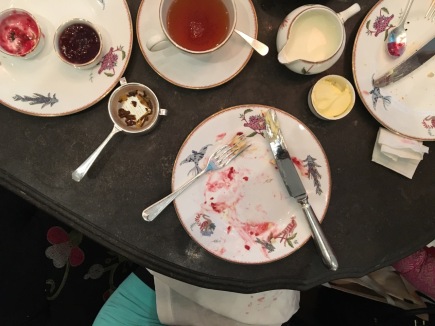